The Great Sandy National Park region in Queensland, Australia is a special place for many reasons including its very unique ecosystems and soil dynamics where majestic tropical forests rich in biodiversity are literally growing on pure sand 1,2,3,4.

This region supports a unique variety of plant communities ranging from coastal open woodlands to rainforests thriving on sand of different ages and nutrient availability. One unique ecosystem and the focus of our study is the wet-sclerophyll forests found on K’gari (Fraser Island), Queensland.

The case for an endemic species – Syncarpia hillii

On K’gari, these forests are home to the narrowly endemic species Syncarpia hillii and the more widely distributed Lophostemon confertus. They are listed as an “of concern” regional ecosystem with ~10,000 hectares remaining6.

Understanding the dynamics of these forests for conservation is limited. Little is known about Syncarpia hillii, and the loss of wet-sclerophyll habitats could affect endangered animals (e.g. glider possums, powerful owl) that live in these forests7.

Traditional Butchulla landowners managed K’gari’s ecosystems through frequent burning prior to European interference from the mid-19th century; fire management changed to infrequent high intensity fires with the takeover8. Syncarpia hillii was found to be resistant to marine borers and was heavily logged for construction of the Suez Canal. Logging stopped in 1991 when the island was recommended for World Heritage status9.

What did we do?

Motivated by the need to direct conservation efforts, we analysed long-term experimental plots of wet-sclerophyll forest on Fraser Island, Queensland. These plots were originally set up by the Queensland Forestry Department in 1952 and regular measurement of trees were made till 1989. Trees with a diameter at breast height (DBH) of 10 cm or larger were measured, identified according to species, and their locations within plots mapped.

In the 2016-2017 period, we returned to remeasure existing and new trees in three 0.4-hectare plots that were previously established. According to historical records, these three plots have been subjected to varying degrees of selective logging, fire, and cyclone disturbance between 1952 to 1989. 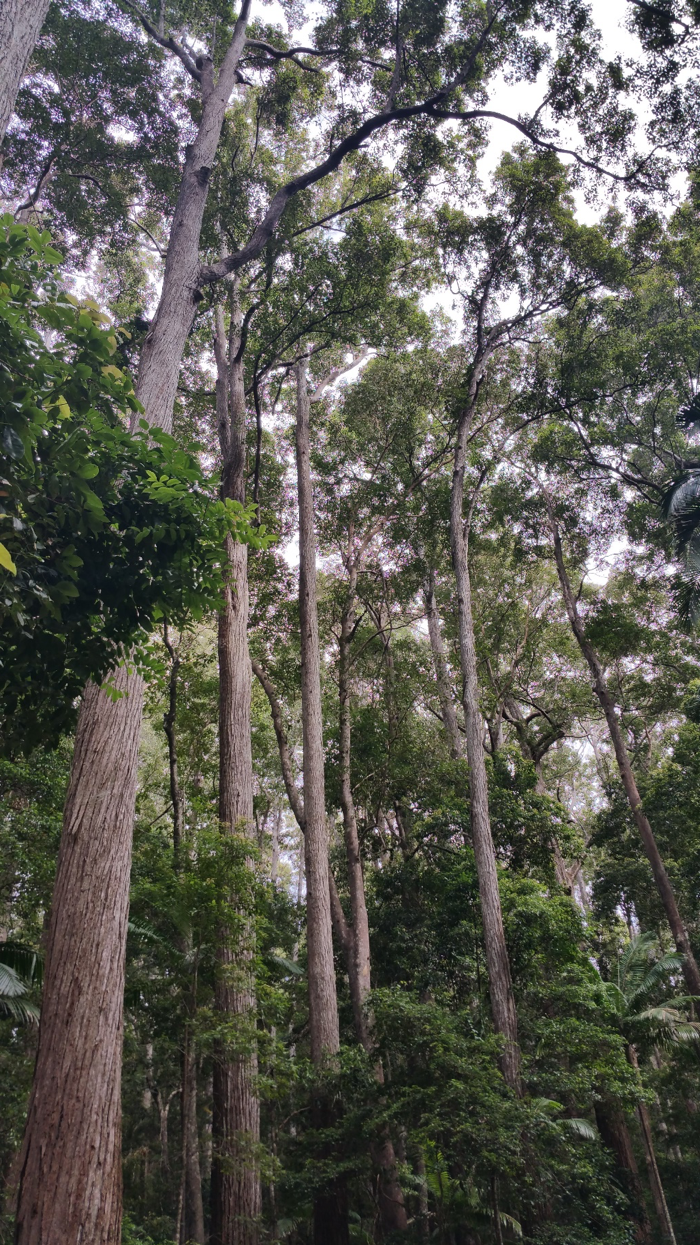 Syncarpia hillii and Lophostemon confertus were the main species found in all plots. Others such as Agathis robusta, Eucalyptus microcorys, and Eucalyptus pilularis were also present but in smaller numbers. The plots were subjected to heavy logging and fire before 1952 (circa 1915).

In general, our results suggest that Syncarpia hillii–Lophostemon confertus are maintaining their dominance in the canopy, but they are also being out competed by rainforest trees.

The two most common rainforest species were pioneer trees Schizomeria ovata and Backhousia myrtifolia which occur in the upper canopy of rainforests on K’gari9.

Location of stems ≥ 10 cm DBH in 1952 and 2017 in 0.4-ha plot in Syncarpia hillii–Lophostemon confertus forests. The five main tree species are indicated by different colours, and sizes of dots represent DBH size classes as indicated.

Are rainforests taking over?

Their fast establishment relative to Syncarpia hillii and Lophostemon confertus raises concern that rainforest may eventually replace the wet-sclerophyll forests studied here. It is possible that rainforest species recruitment was triggered by a cyclone event in 1975, creating gaps in the canopy for colonisation. Regardless, our 2017 survey detected the highest rate of recruitment in all plots, indicating favourable growth conditions for rainforest trees.

To burn or not to burn?

Both Syncarpia hillii and Lophostemon confertus are unlikely to sustain their presence over time in an unmanaged forest, that is, in the absence of fire or other interventions.

Studies in North Queensland and Tasmanian wet-sclerophyll forests have observed declines in dominant Eucalyptus species from lack of a suitable fire regime and subsequent encroachment of rainforest species7,10,11.

Fire exclusion confers a competitive advantage to rainforest species as they develop quickly and can subsequently reduce the likelihood of fire7.

While the pros and cons of rainforest expansion remains debated in Australia7, the restricted distribution of S. hillii–L. confertus forests to K’gari and the surrounding Cooloola region makes their conservation a priority.

Fire, however, is often negatively perceived by the public and attempts to reintroduce it for conservation purposes is difficult, especially in a tourist hotspot like K’gari.

Is all lost if fire cannot be used?

Unlikely, as wet-sclerophyll forests have been maintained by selective logging in Tasmania11, and perhaps to a lesser degree, in our studied plots. It is however, difficult to propose logging as a substitute on K’gari due to its World Heritage status, cessation of commercial logging 28 years ago, and the general debate over its suitability compared to fire.

How can we conserve these forests?

Improving knowledge on seed germination, early establishment, and the drivers of tree recruitment across a broader range of environmental conditions will improve predictions of species’ trajectories and the future of these wet-sclerophyll forests.

In addition, a collaboration between the Queensland state government and Butchulla landowners on best practices for conservation may substantially improve the longevity of Syncarpia hillii-Lophostemon confertus forests on K’gari.