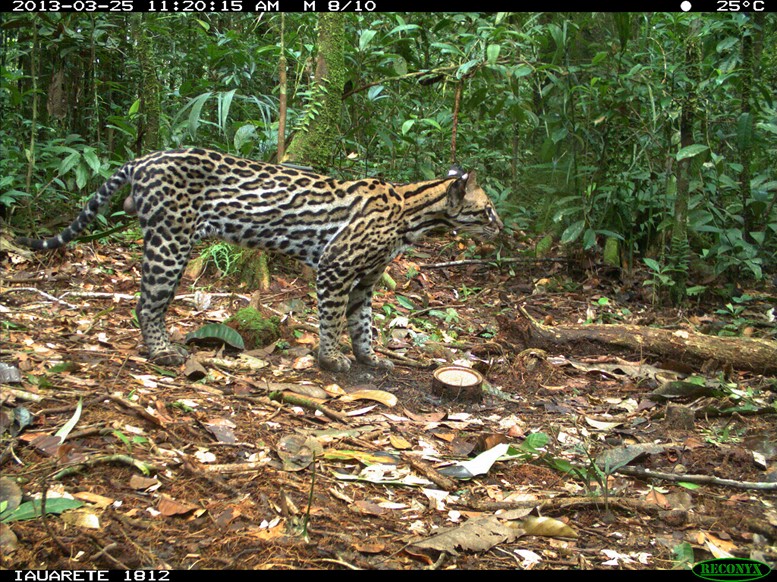 The Amazonian rainforest supports more than half of the worlds’ species of plants and animals, and also plays a major role in providing ecosystem services for human and sanctuaries for wildlife. Unfortunately, ongoing deforestation and habitat fragmentation, for social-economic reasons, threaten these forest dwellers and their livelihood. How do these forest inhabitants respond to this influence? Do they tend to occur in specific habitat, or are they adaptable to a wide variety of habitat? It is essential to investigate these questions so as to avoid irreversible biodiversity loss in the landscape.

The ocelot Leopardus pardalis (Linnaeus, 1758; Fig.1) is an ecological important medium-sized predator and a conservation ambassador species, yet there are no previous studies on its habitat preference and spatial patterns in this biome. We gathered data from 899 non-invasive camera trap stations at 12 sites in Brazilian Amazonia to examine the habitat use of the ocelot, namely, the ocelot’s occurrence. This is by far the largest known dataset for this species. These detection/non-detection data from camera trap stations were translated into probability of habitat use for the ocelot. We then investigated the influence of different environmental variables (elevation, slope, forest cover, and distance to river/lake) and anthropogenic impacts (distance to roads, distance to settlements and measures of forest fragmentations) on the ocelot habitat use. We hypothesized that ocelots would have a bias for flat land, dense forests, areas near rivers/lakes and avoid approaching roads, settlements and fragmented forests.

We found that the habitat use by ocelots was positively associated with forest cover, disjunct core area density, distance to roads/settlements, elevation, and negatively related to slope, distance to rivers/lakes, in accordance with our hypothesis (Fig.2). Dense and closed canopy forest with access to river/lake provide a favorable habitat for ocelot, where they could find safe refugee and avoid from sympatric predators and gain sufficient water source and food source to survive.

Surprisingly, ocelots also emerged as rather adaptable and their habitat use was not much influenced by other environmental variables. For example, ocelot have been recorded in a great variety of habitats, from heavily-logged and fragmented forests, to early and late successional forests, the outskirts of major cities and towns, disturbed scrub/woodland savannah and agricultural areas. Our findings also suggested that the ocelot is able to occur and thrive in areas with a certain degree of forest fragmentation process (see Fig.2d, habitat use is positively associated with disjunct core area density).

Nevertheless, one limitation of our study is that we could not cover all the factors which may affect habitat use of the ocelot, such as the occurrence of competitor species and the presence-absence of prey. These might play an important role in shaping the ocelot habitat use pattern. Thus, the future research might focus on multi-species interaction, especially on the relationship between the ocelot and its prey and predator.

Our findings uncovered the ocelot’s preference for forest cover and higher elevation and a dislike of roads, settlements, steep slopes and rivers. These findings shed light on the home preferences of ocelots which are valuable information for conservation management and land‐use planning.

If you are interested in our study, please click our beautiful short animation which showcases this research and what you can do to help protect the magnificent Amazon rainforest (https://www.youtube.com/watch?v=RunyPlYxun8).