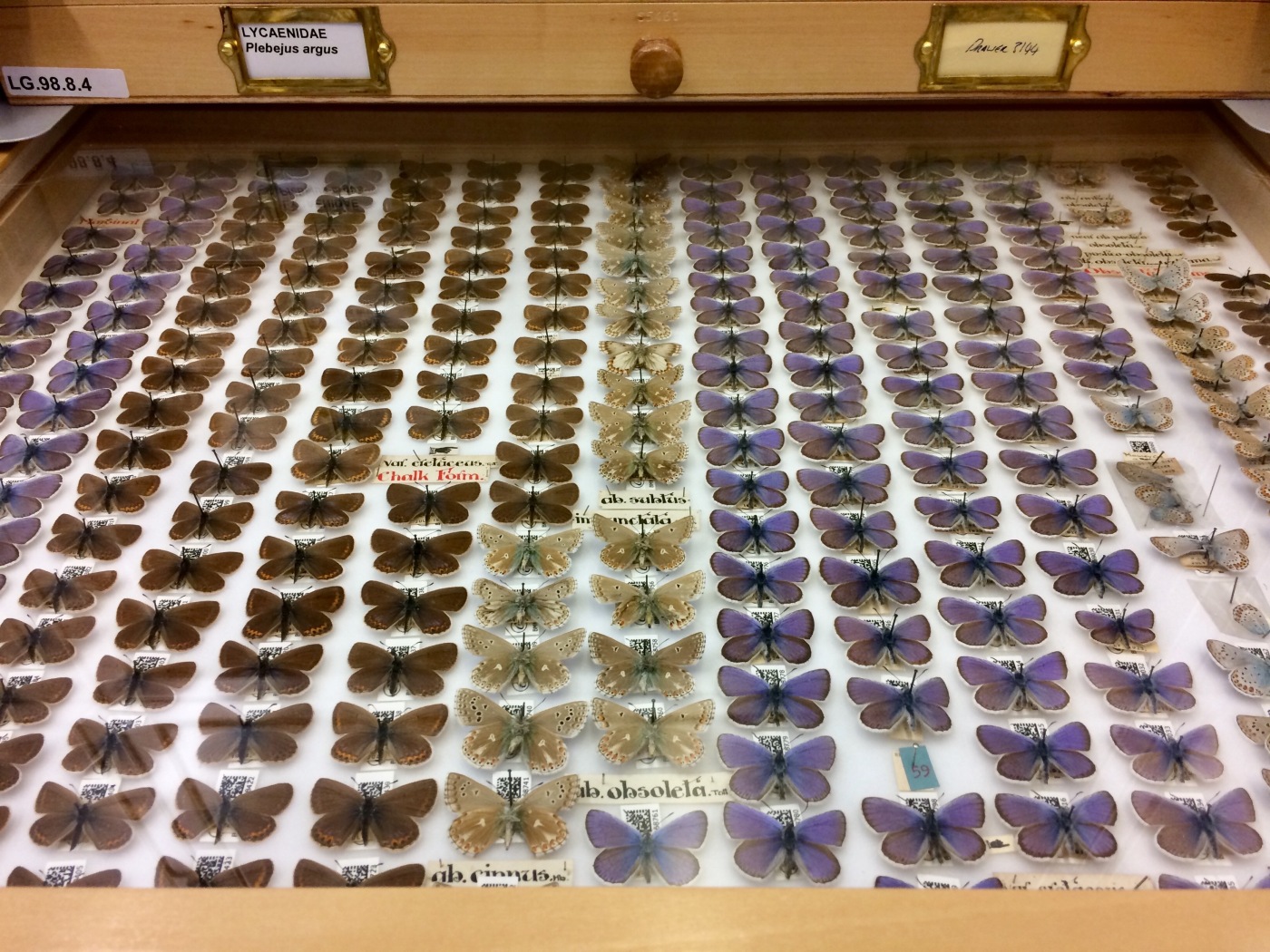 On some days, the Natural History Museum (NHM) in London may seem like an over-crowded hall of curiosities, where visitors come only to stare at the big animals, like the dinosaurs or the whale skeleton hanging from the ceiling. But look closely and you’ll find that the smaller and more common specimens housed at the NHM are worth paying attention to. Deep in the cocoon and maze of underground corridors lie millions of specimens, including a wide range of species collected globally, from fossils and dating back millions of years ago to modern specimens collected in recent years. These specimens not only provide us with an insight into the biological world of the recent and distant past but when used to good effect, can help us answer some of nature’s most complicated questions of today.

Insects are one of the most common and diverse groups of animals on Earth. The NHM is home to millions of insect specimens from across the world, but the majority of these specimens are hidden away in drawers away from the public eye…until recently that is. In the past few years many of these specimens and their meta-data (location and date of collection) have been photographed and turned into digital online collections. The iCollections, for example, includes all British butterflies and moths held in the museum. Thus, these hundreds of thousands of specimens are now globally available for researchers, which would not have been previously possible without physically visiting the museum and handling their delicate bodies.

In our paper, we sought to evaluate the research utility of the iCollections to help answer a recent question nagging ecologists: Will the body sizes of animals get smaller in response to climate warming? Reduction in body size has been suggested to be one the “universal” ecological responses to climate change, but recent studies suggest that insects may have more complex responses – which may be due to their complicated life cycles. We used images from the iCollections to analyse how adult body size changes with temperature for three British butterfly species. Our study species were the Adonis Blue (which has two generations per year), the Chalk Hill Blue (one generation per year) and the Silver-studded Blue (one generation per year). As the names suggest, these butterflies can easily be spotted due to the distinctive blue colour of the males’ wings (or the orange spots on the edges of the brown female wings). The Adonis Blue can be seen on south facing chalk hills from May to June (generation one) and August to September (generation two) alongside the Chalk Hill Blue from July to September, whereas the Silver-studded Blue can be found on a variety of habitat types, most commonly on heathlands, in July and August.

We measured the forewing lengths of each specimen from the images. Average forewing lengths were analysed alongside mean monthly temperatures (from the MET office), coinciding with the caterpillar stages of each species. Furthermore, males and females were analysed separately and for the Adonis Blue, generation one and two were also analysed separately to determine if the sexes and/or generations respond differently to temperature.

For the males of each species, we found that adult size increases with temperature only when temperatures are high during late stages of caterpillar growth but adults decrease in size with increasing temperature during early stages of caterpillar growth. Females, on the other hand, showed varying responses between the species, with some following the same pattern as males and some showing no response at all. Additionally, the second generation of Adonis Blue also showed no response to temperature for males or females.

Our results highlight both the importance of analysing males and females separately, and the usefulness of museum collections for research into biological responses to climate change. The variations in responses between species are likely due to the specific ecological and environmental conditions they grow in, while the differences in responses between males and females are potentially due to whether earlier emergence is more important than growing for longer (and to a larger size) for individuals of each sex. We also show that responses can differ between caterpillar stages, and therefore, how future increasing temperatures will affect adult size will depend upon which months are warmer than average.

With improvements in technology coming thick and fast, the avenues for collections-based research are ever expanding. Advances in machine learning, for example, could mean that time sapping tasks such as exhaustive manual measurements of physical or digital specimens will become a thing of the past. In the near future, computers will be able to measure these specimens for us in a fraction of the time, and therefore, we will be able to analyse a wider range of specimens to determine if the patterns we found for our three species are consistent across other butterfly species. Our study represents just one example of how digital museum collections can be a useful tool for climate change research.

Whether pinned, encased in a slide, sitting in a jar or cardboard box, the millions upon millions of natural history specimens housed in the back rooms and basements of natural history museums across the globe are now ready to pose for their picture, and with technology improving at an ever advancing rate, the possibilities for future research are endless.