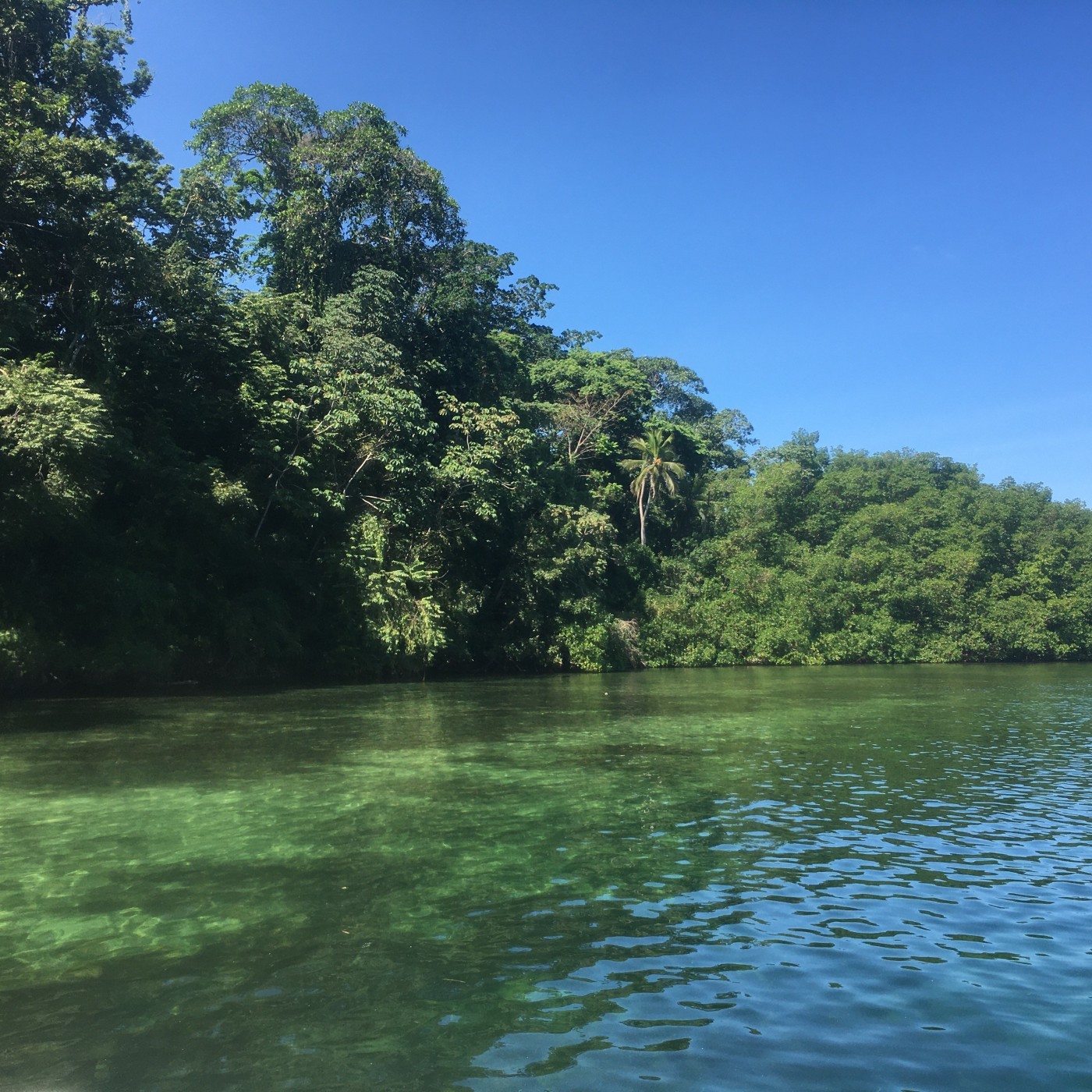 When most people think of coastal hypoxia, polluted areas with lots of people living nearby come to mind – not remote tropical coral reefs. Yet, in a large Caribbean bay where tropical jungles are practically kissing the shallow coral reefs in the warm waters below, severe hypoxia has also made its mark.

Our study found seasonally predictable hypoxic waters at the bottom of Almirante Bay, Panama during the warmer half of the year. The bay during this time is highly stratified, with deoxygenated water at depth (20m) separated from a small top layer where oxygen levels are higher. This has resulted in the mortality of reefs deeper than 3 meters in some areas.

We found that deoxygenation is most extreme close to the mainland, where highly stratified hypoxic waters shoal onto shallow reef sites. It is clear that corals and associated life die after chronic exposures to low oxygen waters, however it isn’t clear to what extent, or how badly these processes are affecting the marine life on the reef sites above this.

One of the most interesting findings of this study was that the intensity of hypoxia documented at depth appears to be reflected in adjacent shallow water as the magnitude of diurnal change in dissolved oxygen. So the shallow reefs that haven’t experienced the impact of persistent, chronic hypoxia at depth (resulting in severe mortality) are still being impacted by a type of hypoxia. The dissolved oxygen here widely fluctuates throughout the day with oxygen levels almost declining to zero at night, and then soaring in the afternoon to super saturated levels.

We wanted to know how such frequent changes in oxygen affect the organisms living on these reefs. To study this we used the widely distributed tropical polychaete fireworm, Hermodice carunculata, which is associated with coral-dominated areas and reef decline. These worms can be as long as your foot and often openly flaunt their brilliant colors on the reef where they can be found sucking down coral polyps. They are called fireworms because of their potent harpoon-like chaetae that line their sides and can cause a nasty sting if touched.

Right next to each bunch of stinging chaetae there are branching gill structures (branchiae) consisting of many filaments that extract oxygen from the environment. More gill filaments should mean an increased capacity for gas exchange, and more oxygen available for the worm to go along with its daily activities.

We manipulated oxygen levels in the lab to reflect the shallow hypoxic environment, where oxygen levels change widely throughout the day, and kept fireworms in these conditions for eight weeks. We wanted to determine if the gills of these fireworms would grow in response to low oxygen, and if they could regenerate faster if they were cut off.

These results suggest that the reefs further from the mainland actually may be experiencing more hypoxia than we thought or measured, and that the worms from these reefs may already be prepared to deal with periodic hypoxia.

Along with gill morphology changes, we expected worms to have an increased ability to take up oxygen from the water after being in hypoxic conditions. We predicted that the worms would be metabolically depressed under low oxygen conditions (breathing less), and after re-oxygenation they would breath more to make up for the oxygen deficit occurring during hypoxia stress. Oxygen consumption rates were measured to see how much oxygen worms were actually taking from the environment immediately after hypoxic exposure. Yet after 8 weeks, we found no significant differences in the oxygen consumption rates of worms exposed to periodic hypoxia. In other words, these worms had the ability to bounce back quickly, metabolically speaking, with normal respiration rates despite previously being in water with very little oxygen. Surprisingly, this was not the case with the worms that had been kept in oxygenated conditions for 8 weeks. After this control group was put in hypoxic conditions, they had dramatically depressed respiration rates upon re-oxygenation.

This suggests that by switching metabolic efforts on and off promptly in response to oxygen availability worms with prior hypoxic conditioning may be able to take advantage of oxygen when it is present in the environment—a trait of great functional importance in rapidly changing environments.

The findings here indicate that hypoxic conditions in shallow coral reefs may be underestimated, and also that H carunculata has the physiological ability to maintain and withstand hypoxia without much of a cost. This is important because it could mean that fireworms have an advantage in rapidly changing environments. They are already considered to be detrimental to coral, degrading living coral reefs and spreading coral disease. As hypoxia is becoming more common and globally prevalent, it is imperative to understand the organismal responses to determine the implications of these processes for reef invertebrates and ecosystems.

This work would not have been possible without the support and funding from the Smithsonian Tropical Research Institute. We also wish to thank the Bocas Research Station team, Plinio Gondola, Lucia Rodríguez, and Travis Scott, as well as the valuable contributions from reviewers.

2 thoughts on “Coping without oxygen, under water.”