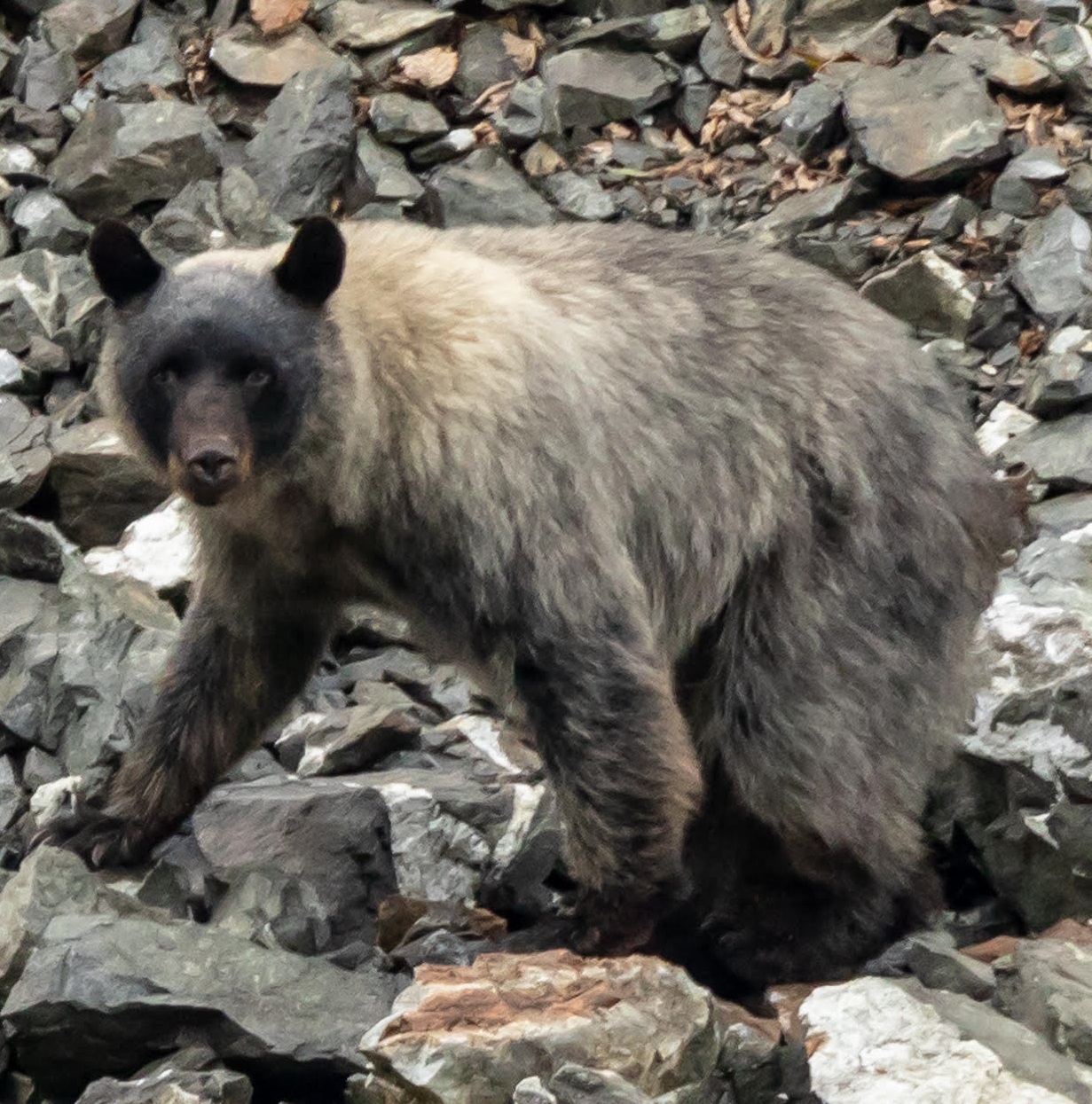 There are few animals as elusive and mysterious as the glacier bear in Southeast Alaska and northwestern British Columbia, a region characterized by deep marine fjords left by the Pleistocene ice advances, steep rugged mountains from ongoing tectonism, and large glaciers and ice fields maintained by persistent cold precipitation. Glacier bears, also known as blue bears, are uncommon color variants of black bears (Ursus americanus) whose pelage ranges from white to grey to black with silver tipped guard hairs. The Alaskan Native Tlingit name for these bears was “siknoon” which translates into “a bear that disappears” in reference to their elusiveness and ability to blend in with snowfields (Lewis et al. 2020). These unique creatures are the subject of stories and books, and rare sightings are a once in a lifetime experience for a few lucky people. Glacier bears are also targeted and opportunistically harvested by sport hunters in some areas. Previously there was very little scientific knowledge regarding their range, the frequency, or the genetic basis of their unusual pelage color. This lack of knowledge has made it difficult to manage and predict the future survival of glacier bears.

Neil Barten worked as a biologist for Alaska Department of Fish and Game (ADF&G) in Juneau in early 2000s, managing bear-human conflicts during a time when glacier bears were quite common in Alaska’s capital city. Bear problems in Juneau were increasing due to improperly stored trash and other attractants, and a few glacier bears were guilty of perpetuating this problem. Several glacier bears were hit by cars and up to six “nuisance” glacier bears were translocated, including a black mother bear with two glacier cubs and one black cub. Despite their prevalence in the capital city, Neil knew that glacier bears were uncommon in most areas, with only a couple harvested by hunters each year primarily near Yakutat over 100 miles to the northwest. Neil began collecting tissues from glacier bears captured or harvested to take advantage of recently developed genetic methods. As a management biologist, he recognized that genetics may be the key to answering basic questions about this little understood animal.

Meanwhile Tania Lewis was hired to conduct bear research and management in Glacier Bay National Park and Preserve (GBNP&P), which lies halfway between Juneau and Yakutat. When Tania started digging into park archives to write the park’s first Bear Management Plan, she found a map of glacier bear sightings and harvest locations compiled by Linda Wiggins, wife of Canadian bear safety expert Steve Hererro. Linda had conducted visits to the region to attempt to determine the range of this rare color phase (Lewis et al. 2020). In 2009, at the Third International Human-Bear Conflicts Workshop in Canmore BC, Tania, Neil, Linda and others met for dinner to discuss glacier bears and the need for a collaborative research study to learn more about these mysterious creatures.

The team began collecting more genetic material of black bears across the range of the glacier bear color morph. GBNP&P and ADF&G staff collected DNA noninvasively from hair as well as tissue samples from harvested bears, noting the color of the pelage. Researchers used the DNA to examine genetic structure between populations of black bears within the geographic extent of glacier bears and explored how this structure related to pelage color and landscape features of a recently glaciated and highly fragmented landscape.

Ten populations of black bears were found in the study area divided largely by geographic features such as glaciers and marine fjords. Glacier bears were assigned to four of the ten populations found on opposite sides of two long fjords (Glacier Bay and Lynn Canal) with a curious absence in the non-glaciated peninsula between. Lack of genetic relatedness and geographic continuity between black bear populations containing glacier bears suggest a possible unsampled population and/or an association between glacier bears and large icefields, which would suggest a selective advantage for glacier bears in glacial environments. Such an association would increase the conservation risk of the color morph as glaciers recede suggesting further investigation is needed to determine the adaptive and evolutionary significance of the glacier bear color morph. Determining the genetic basis of the glacier bear color morph will also be necessary to determine the frequency of the gene(s) across black bear populations containing the rare phenotype. These results shed light on the distribution and population structure of the color morph across the region and may help focus conservation efforts to maximize and preserve genetic diversity of black bears as glaciation of the region decreases with climate change.

2 thoughts on “The Mystery of the Glacier Bear”