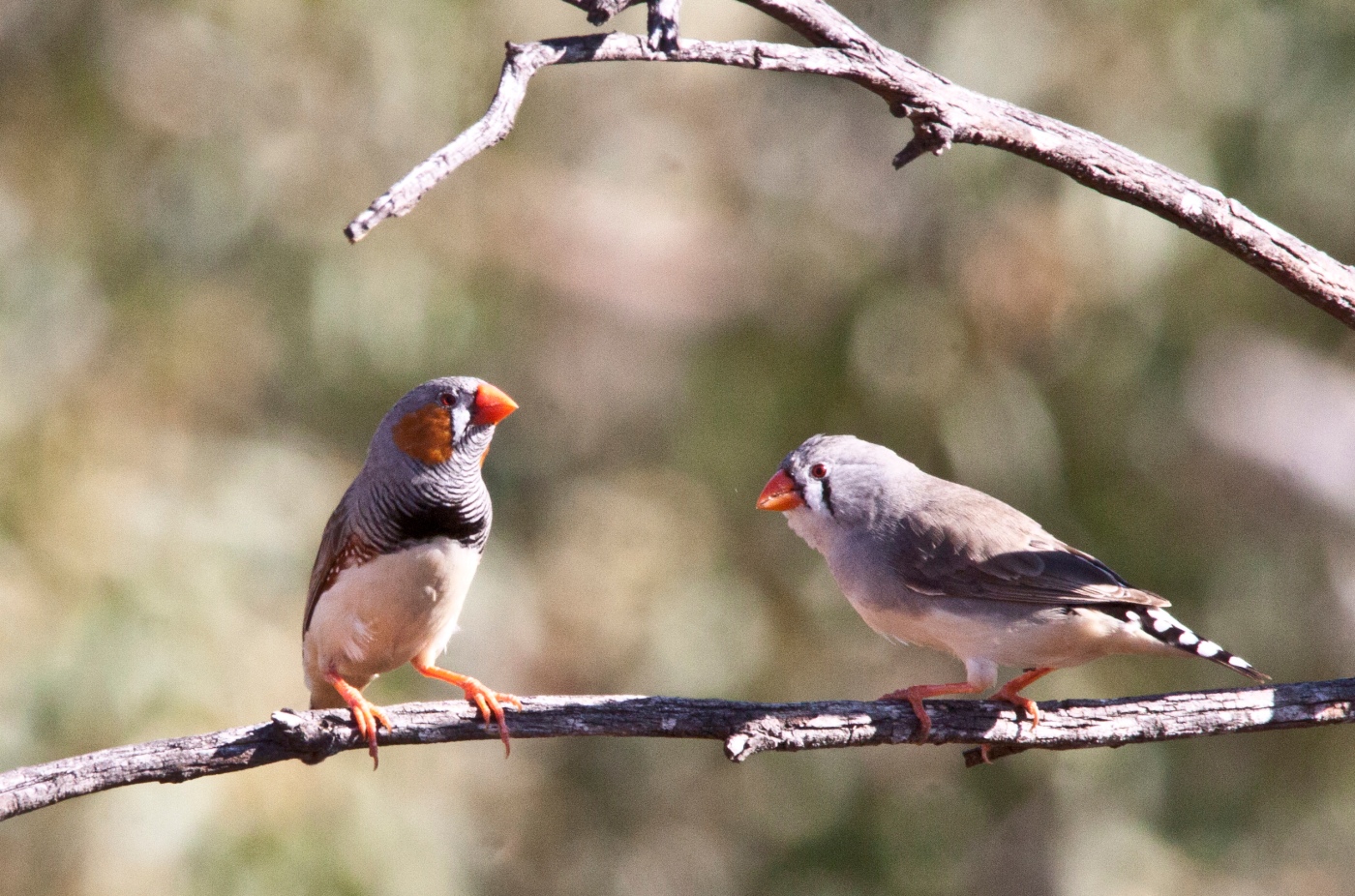 A huge and diverse taxonomic group of birds, from temperate crows to tropical birds-of-paradise, learn their songs by imitating adults of their species that they hear when young. Understanding the complicated genetic and cultural evolution of song is interesting not just in its own right, but also as a window into the mechanisms by which communication systems arise and persist. A large part of understanding how this occurs is learning what kind of information is exchanged via song, and how that information benefits both senders and receivers in order to make it a communication system worth investing in. We have known for many years, for instance, that male song can tell a female a lot about a male’s species, location, and willingness to mate. But with playback experiments, we are just beginning to understand the incredible nuance of song. Females of many species respond differently to songs that vary in geographic origin, age, and developmental conditions of the singer. These sorts of experiments indicate that a female is not only able to use song to find a mate of the right species, but also one from the same area, of the ideal age, and who had a healthy development.

The inspiration for our present study came from a larger body of research investigating the ways in which song—because it is learned during a sensitive period of development and vulnerable to disruption—can signal past developmental stress and allow females to choose healthier mates. In addition to song from developmentally robust males, female songbirds of many species are also known to prefer longer and more complex song, or in species in which males sing multiple song types, a larger repertoire. A 2008 study by Boogert and colleagues found a positive correlation between learning ability in zebra finch males and the complexity of their song, which neatly connected two related theories of bird song—that song serves as a signal of healthy brain development, and that females have sensory preferences that lead to the evolution of more complex song. If song complexity and brain function are connected in males, it could explain why female preference for less monotonous song have persisted—because only males with well-functioning brains can learn and produce complex song, and those well-functioning brains also help take care of more offspring.

As elegant as the theory was, it quickly fell apart. Not only were many “preferred” features of song found to have null or even inverse correlations with the time it took males to learn cognitive tasks, the entire concept of a general cognitive ability in birds also had mounting evidence against it. But we were still interested in the connection between brain function and song, despite the complicated and conflicting evidence for it. Maybe it is too broad to say that song complexity = general cognitive ability, but is it possible that song still contains information about some cognitive abilities? And is it possible that if that information is there, it is encoded in a way that does not map perfectly onto the ways that we as researchers often define song complexity, as numbers of motifs and unique notes?

We decided to test not whether song attractiveness was correlated with general cognitive abilities, but whether song attractiveness was correlated with performance on a specific task we thought most likely to affect parental care: the ability to gather food from a new source. And instead of measuring song complexity by looking at spectrograms and visually categorizing complexity, we decided to present the songs to a set of females to see whether they could determine a difference between high performers and low performers when given only their song.

We used zebra finches as our test subjects because this species had been used in many of the original studies looking at this topic. First we tested male learning ability in their “novel foraging” task—how quickly they would be able to learn to flip an object covering a food reward. We tested a large cohort of males and found two distinctive groups on either end of the spectrum—those who breezed through the task in the minimum number of trials, and those who were unable to learn even after weeks of prompting. Six males were selected from each group and their song recorded, which was then made into pairs of “quick-solver” and “non-solver” songs to present to females. It was critical that the females not know the males—we didn’t want them using song to identify a male that they knew already knew to be particularly attractive or unattractive. We instead used fifteen naïve females who had never been housed with the males in question, and thus could assess the males using only their song.

We then tested females on multiple pairs of quick-solver vs. non-solver song. We did this by installing two perches in each female’s home cage that could trigger playback of a song when hopped on, and thus measure a female’s preference through number of hops. To ensure that females understood the perches and were triggering favored songs, we first compared female responses to the songs of zebra finches versus rufous-collared sparrow, knowing that they would prefer song from their own species. When females demonstrated proficiency with the perches, we moved on to quick-solver vs. non-solver. Remarkably—because there was no discernable difference between song types to us—we found that over thousands of hops, females were preferring quick-solver over non-solver songs about 60% of the time. To put this in context, they preferred zebra finch vs. sparrow song 70% of the time. We analyzed our data using three statistical approaches: (1) with a non-parametric Wilcoxon sign-rank test, which essentially determined whether there were more deviations from the null preference than you would expect, (2) with a mixed effects linear model, which also determined whether female preference deviated from the null and whether factors such as order of presentation, specific female, or specific stimulus song had any effect on the findings, and (3) with a hierarchical Bayesian model, which modeled a population-wide preference given individual female preferences for quick-solver songs. In each model, we found a significant (or in the case of the Bayesian model, non-overlapping credible intervals) result: females preferred the quick-solver song in every pair of stimulus songs.

This is an exciting finding because the females knew absolutely nothing about the males, yet were still more interested in the song of a male who had quickly performed a cognitive task over one who was never able to figure it out. There have recently been a few studies showing that females prefer “smarter” males when observing them figure out tasks, and our results added a new dimension: females were preferring the males who solved the task, and they were able to make that distinction based on song alone. Song, in other words, can contain information about problem-solving ability in addition to everything else we already know it encodes. It’s a remarkable communication system, from the males who are able to so accurately advertise various aspects of their brain and behavior, to the females who are so accurately able to decode it. And while there is still a lot more to understand about problem-solving ability and song, this finding indicated to us that while there might not be a straightforward connection between song complexity, female preference, and male brain function, this is still a rich area for further study and a valuable insight into how communication systems arise and persist.