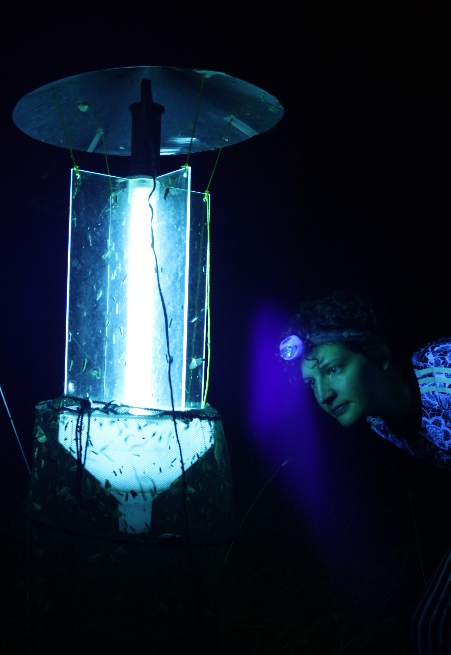 For millennia, humankind has modified its environment by working the land to harvest crops, building traps or lures to hunt animals, or logging wood to build huts and start fires providing warmth and light. These modifications have massively expanded, first by population growth and human dispersal, then by industrialisation. One major factor that influences our environment nowadays is artificial light at night (or ALAN for short). During the last few decades the use of artificial light has increased dramatically, leaving about 80% of the world with light-polluted night skies. This has consequences, especially for nocturnal wildlife that is not adapted to such high light levels. Artificial light at night can disrupt aspects of individual animal’s behaviours, like foraging, commuting and mating.  However, ALAN also has effects on the community level, like interrupting pollination processes or shifting the balance between trophic levels, i.e. changes in predator-prey interactions.

A global example of predator-prey interactions comes from echo-locating bats that hunt for eared moths. Bats are a very successful order of mammals with more than 1400 different species adapted to all (non-icy) habitats across the globe.  Although they specialize in many different food sources, most of them are insectivorous. Moths belong to the order of lepidopterans and are a little bit like the nocturnal partner to butterflies, yet no less spectacular or colourful. With more than 150,000 species worldwide they are an important food source to numerous others, including bats. Notably, as the predator-prey interaction happens at night in complete darkness, it is mainly based on sound. Bats orientate and forage by emitting very loud and high-pitched echolocation calls, but eared moths can hear these calls and use them to elicit evasive manoeuvres. If moths detect a bat from a distance then it is thought that moths perform what is called “negative phonotaxis”, where they fly away from the sound source. On the contrary, when a bat is close and the situation is more precarious, they will perform so-called last-ditch manoeuvres, where they fly erratically, dive to the ground or loop and zigzag through the air. Both types of manoeuvres increase moths’ survival chances.

With increasing artificial light levels at night, both sides of this predator-prey interaction are influenced. For bats, this influence can be both positive and negative dependent on the species.  For light-aversive species there are negative effects, as they have a reduced habitat, but for light-tolerant species there can be positive effects, as they can exploit accumulations of insects around streets lamps. In contrast, light has primarily negative effects on moths. Anyone who has gone for an evening stroll will have observed how strongly they are attracted to street lamps. Their attraction to the light can be so strong that the moths become trapped, interrupting their normal activities such as feeding, mating or commuting. Furthermore, this attraction also effects moths escape strategies and interferes with and supresses the moths’ evasive flight behaviour, making them more vulnerable to their predators. Since the sixties, studies were conducted measuring this effect, however, they either only focused on the last-ditch manoeuvres or could explain their result by only the effects on last-ditch manoeuvres. Just one study explicitly addressed the overall effect of light on the evasive flight in moths by investigating the diet of bats in lit conditions. Bats’ diets could be explained best with models that assumed a complete light-induced suppression of both evasive manoeuvres, negative phonotaxis and last-ditch manoeuvring.

With our study, we replicated two studies from the sixties, yet with a little twist. Those studies compared the trapping efficacy of two light traps, one of which was alternately equipped with loudspeakers that broadcast bat-like ultrasound and showed that ultrasonic traps caught lower number of moths. However, moths approaching the light trap always crossed an area of high-sound pressure level that mimicked a close-by bat and would likely have elicited last-ditch manoeuvres. To examine the overall effect of light, considering both evasive strategies, we thus adapted our setup and combined an omnidirectional light field with a directional sound field. Our setup therefore combined loud and faint sounds with light of different intensities, as a moth would typically experience throughout the night. Depending on the angle from which the moth approached the light, it experienced levels that mimicked different levels of predation threat, some of which should only elicit negative phonotaxis while others would elicit last-ditch manoeuvres. We were wondering if testing both evasive manoeuvres at the same time would influence the number of caught moths.

And indeed, it did not. Comparing the number of moths caught over 15 nights, we did not find a difference between the ultrasonic and silent trap. This is contrasting with the similar experiments from the sixties that found a repelling effect of the playback on moths in light, but it is in line with the modelling study that suggested that bat diets in light areas were best explained by a complete light-induced suppression of evasive behaviour in moths. Our results therefore support the idea that light can suppress all types of sound induced evasive flight behaviours in moths. Even though last-ditch manoeuvres might occasionally be performed, light might completely suppress the moth’s first line of defence, negative phonotaxis, therefore severely reducing the moths’ capability to avoid bats, and ultimately their survival.

But non-significant results like ours can be tricky. How can we distinguish between a truly lacking effect and an inadequate experimental design? There cannot be proof, but some thoughts might exclude alternative explanations: (A) When we tested our playback in darkness, it was functional in eliciting both last-ditch manoeuvres and negative phonotaxis. (B) Habituation due to our continuous playback might have abolished any reactions in the moths – yet former studies with similar exposure times did find a repelling effect. (C) We sampled more nights than previous studies which found an effect with fewer nights. Therefore, the most prominent difference between this study and previous ones is the difference in experimental design.  Specifically, our active mimicry of different levels of predation threat, some of which should only elicit negative phonotaxis. The next steps would now include examining how light specifically suppresses evasive behaviours and we discuss potential ideas of how to test this in our paper.

Overall, the results of our paper provide additional support for the detrimental effect of ALAN on wildlife. Furthermore, we also discuss the likelihood of potential alternative explanations for (lacking) effects, as well as improvements in experimental design and ideas for future tests, which is important for the scientific discourse. Publishing and discussing negative (in the sense of non-significant) results is therefore crucial in our opinion, and we encourage scientists of all stages to take their “non-significant” experiments as serious as the “significant” ones. In addition, we also need more journals to recognize the importance of publishing without bias. Only this joint effort will reflect a more realistic picture of the biological systems studied and prevent driving our overall knowledge into pre-set directions.