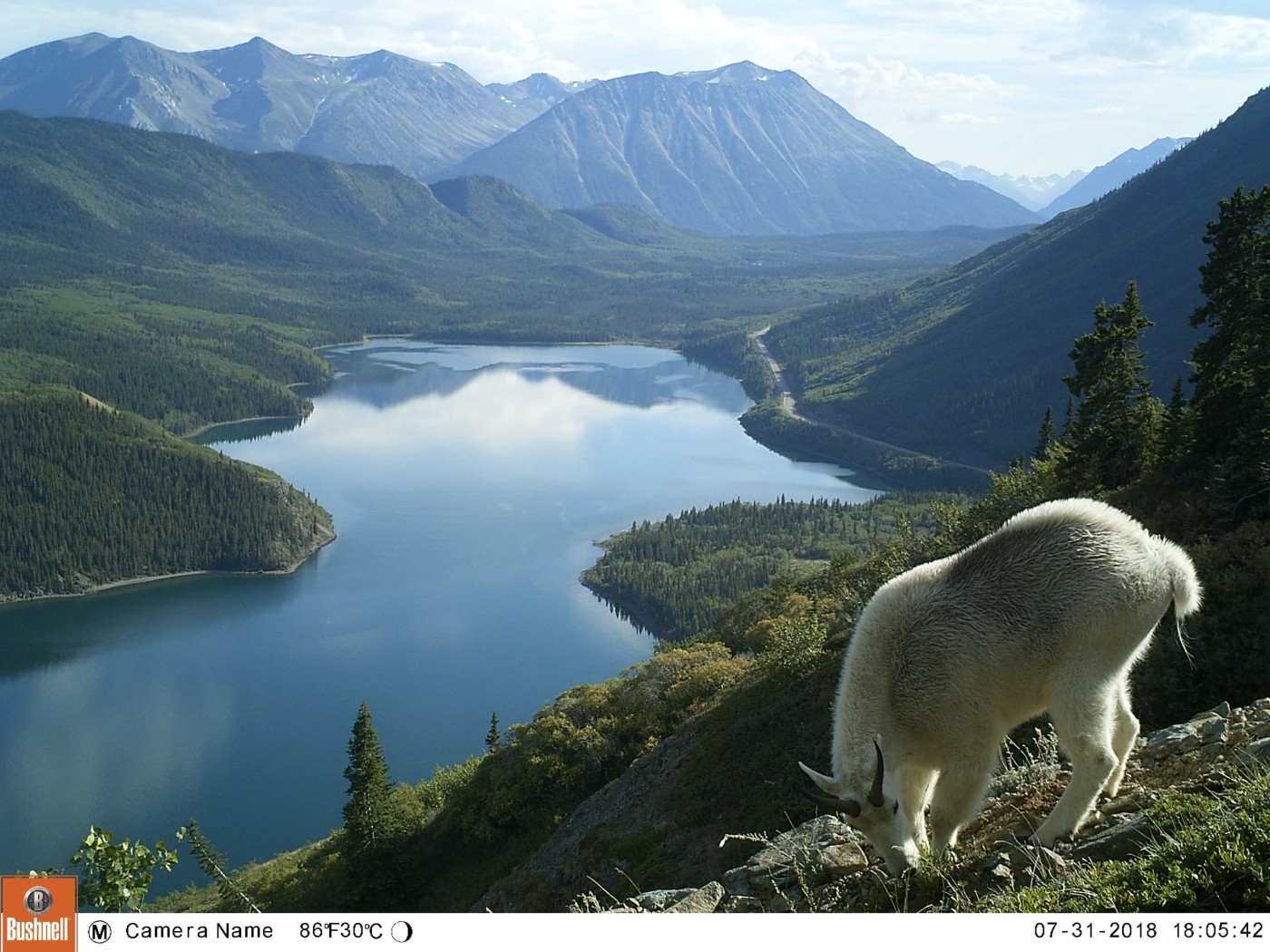 Featured image shows one of the “crown jewels” of our camera trapping season in the southern Yukon: A photo of an adult billy on the steep slopes above the Klondike Highway and Windy Arm of Tagish Lake on the Traditional Territory of Carcross/Tagish First Nation. Note that he is fully shed on July 31 with a wisp of tail hair.

Wildlife photography—amateur and professional—remains a relatively underused source of ecological data and information. With the advent of digital photography, there’s been a rapid explosion of wildlife images including on online platforms such as Instagram, Flickr, and eBird.

We were interested in using photographs to better understand the factors that affect the timing and rate of molt across a wide geographical scale. Molt—the shedding of fur or feathers—is not well-studied in life history research even though mammals and birds regularly molt. And while humans can quickly “shed” our insulated winter coats in springtime, other mammals cannot.

We amassed nearly 700 high-quality photographs of an iconic alpine ungulate—the mountain goat (Oreamnos americanus)—from members of the public in the USA and Canada. These photos were obtained through community photography including by leveraging the CitSci.org and iNaturalist platforms, as well as forums and listservs of wildlife agencies and professional societies. We used the photos to quantify the extent of molt and then investigate factors that affect molt patterns and phenology.

Mountain goats are a good study species because they grow thick two-layered coats to get them through harsh winters. They start to visibly shed these coats in May. We know from other naturalists’ and scientists’ observations and research that males (“billies”) molt before females (“nannies”). The late Tlingit weaver and Traditional Knowledge (TK) holder Teri Rofkar—who used mountain goat hair in her Ravenstail designs—wrote that, “Male mountain goats shed their wool in late spring while the nannies do not lose all of their winter wool until they have weaned their kids.” So—in another example of science catching up to TK—we were also aware of the delaying effects that offspring (“kids”) have on the timing of nannies’ molt. As mountain goats are well-photographed across their range, compiling photographs was relatively straightforward.

Common to many studies involving citizen science is missing data. Rather than throwing out many photographs associated with incomplete information (e.g., sex of the animal, presence of kid), our statistical analysis inferred the likely states of the animals when not known.

In addition to using publicly-sourced photographs, we also conducted a summer of fieldwork at the far northern extent of mountain goat range where we identified a gap in  available photographs: Yukon, Canada. Between May and September 2018, we took repeated photographs of 14 captive mountain goats housed at the Yukon Wildlife Preserve and also camera trap photographs from three sites where goats are wild.

Tracking molt in known individuals allowed us to see whether the community-sourced data would lead to similar conclusions on the factors influencing molt.

There were limitations in the data that we eventually compiled. For instance, most photographs were from recent years and there was variation in how individual animals were oriented in photos (e.g., from the side, at an angle). To deal with this latter added uncertainty, we used 25 equal-sized bins or categories, each representing 4% of a goat’s coat.

Despite data limitations, we were still able to detect effects of sex, presence of kids, elevation and latitude on molt. We found that billies molt earlier in the year than nannies, and that nannies without kids molt before nannies with kids (likely because of the energetic demands associated with having new kids). This latter finding is consistent with those of Florent Dery and colleagues at Caw Ridge, Alberta, where they investigated how body condition affects molting.

We also found that mountain goats molt later in high mountains and faster at northern than southern latitudes; we assume that the mechanisms behind these findings are temperature and daylight, as found in other research on molting.

Findings from the community science dataset and our focal study were consistent. What we found was also consistent with published long-term research and with TK.

Community photography can indeed be a reliable source of data when appropriate analysis techniques are developed. Without the community data, we would not have been able to test how latitude and elevation affect molt across broad spatial scales. Given additional time, we may have improved our temporal scale by tapping into archives and individual photo collections that have not been digitized.

Our findings imply that females with new offspring in areas without high mountains / with “no more up” may become especially prone to heat stress as summers continue to warm with climate heating. They may therefore need to adjust their behaviour, by seeking water, shade, windy ledges, and snow patches (see work on how mountain goats cool themselves by Sarmento et al.). Having a kid in tow may make behavioural adjustments that much more challenging.

Apart from its contribution to scientific data and knowledge, community science and photography can help build community around conservation, wildlife, and climate. People readily shared photographs with us and expressed interest in the research. For example, after a public talk at Glacier National Park, two avid hikers sent us dozens of photos from the 1980s and 90s—a time period that we had been lacking. A professional photographer working in the same park shared slides of mountain goat photos dating back thirty years. We also worked with non-scientists to develop our methods, including a designer-photographer who regularly uses Adobe Photoshop in her work.

In addition to this research paper, our data were also used by Yukon University student Maegan McCaw for her senior thesis; by Aditya Mehta, a high school student to develop Artificial Intelligence (AI) tools and attend a Microsoft “AI for Good” summit; and by a mathematical modeling class at the University of Tasmania. We highly recommend making use of data beyond the life of a project or a single publication by making data openly available for educational purposes!

Scientists, photographers, protected area staff, programmers, members of the public and TK holders can cooperate on research projects to address questions of interest to science and society. Such transdisciplinary collaborations can be rewarding for all involved and can help amplify messages about the urgency of conservation and climate action.

2 thoughts on “Mountain goats’ winter coats: What can people-powered research tell us about patterns and phenology of molt?”